Is coding the new literacy for 21st Century Schools? If so, how can it enhance a transdisciplinary program of inquiry?

This past December I initiated our school’s first ever Hour of Code, the global event that introduces coding through games and activities, both online and offline. The Early Years to Grade 5 classes who participated broke through the obscurity of ‘code’ and by the end of their hour, had accomplished the basics of coding and even created a few games themselves. Furthermore, it was clear to participating teachers that there are numerous math strands linked to computer programming, as well developing a growth mindset. As one author for Edutopia quipped:

Coding continues to be widely discussed and researched in educational circles, and this concept appears frequently on reputable educational platforms like the Erikson Institute’s TEC Center, University of Cambridge and Edutopia.

Despite the discussions, evidence, and resources made available, a larger question still lingers for our IB school:

Where does coding fit in the PYP?

The PYP promotes an inquiry-based, trandisciplinary approach to learning. From an EdTech perspective, learning to code is driven by inquiry and the process of learning code address multiple transdisciplinary skills. As EdTech Coach for Early Years (EY) to Grade 1, I decided to investigate this question further through informal action research and in-class support with teachers and students. I armed myself with a set of TTS Bluebots and the newly released resource Technology and Digital Media in the Early Years and began my journey exploring coding in the play-based classroom. 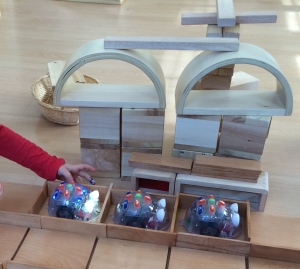 Chapter 11 of Donohue’s Book explores a study of BeeBots and STEM in the early years and Kate Highfield writes:

These studies suggest that robotics can be engaging for young learners and promote collaboration and problem solving, with tangible interfaces and hybrid graphical-tangible tools enabling participationg by young learners. (Donohue, p. 151)

The first opportunity for coding took place in the EY1 classroom, with 3-year-olds. Since our school adopts a play-based approach to learning, the class teacher decided not to give the children instructions but instead observed them as the Bots were introduced into their construction space. As described in my previous post, initially they were not as interested in using the coding arrows to control the BlueBot movements. Instead they adopted an imaginary approach to making them move (flying, jumping, rolling them etc), incorporating the Bots into their regular play with blocks and other materials. Some children were trying to force the Bot to roll on its mechanical wheels, while others were just happy to leave the Bots alone and build ‘houses’ for it.

After some time, we began to ask students what the arrows were for. Some had figured out the arrow buttons made sounds. Others saw that at some point the Bots could move on their own using ‘code’, yet they had not made a connection to how to control the direction of the Bots. Very quickly, students began exploring ways to make the Bluebots move independently using the guiding arrow buttons.

After observing the EY1 children and listening to discussions with the teacher, I noted some clear guiding questions that link directly to the PYP Key Concepts. These questions could help frame the introduction of coding & robotics in all Early Years classrooms. For example:

These questions were explored further in the EY2 classroom with 4-year-olds. After the initial tuning-in, Ms. Mellen sat her students down and had them tell her what the different buttons meant, and wrote them down on chart paper. Using this as a guide, students were able to refer back to the meaning of the buttons and applied their new knowledge as they gained control over their BlueBots movements.

Colourful story floor mats and maps were introduced as a guide for building their logical thinking as well as pattern and sequencing skills. Several children decided to copy out their code on paper as a ‘key’ to remember. One child copied the map images to help him remember at which landmarks his Bot should turn or move forward. Children also used Unifix Cubes to measure out ‘one BlueBot step’ and coded their pathways according to the steps.

Translating a new map on two A4 sheets of paper.

Unifix cube mark out a path for the BlueBot to follow

These children measured the BlueBot step to be approximately 8 cubes

After exploring coding and robotics with the younger years, we became aware of some key PYP Trandisciplinary skills that were also addressed through this inquiry-process: 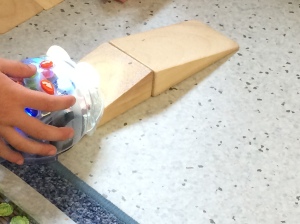 They then tried adding blocks and making it wider 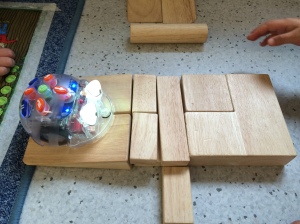 The children find a way to make the ramp all one height, but still need to solve to problem of having it move from the carpet to the ramp without support.

The EY2 class discuss possible reasons why it won’t go over the bump on the carpet and the ramp. They brainstorm possible solutions.

I think the area that I’m most happy about the BlueBots supporting is Research Skills. It is often difficult to document and say specifically what researching looks like with very young children. I think the BlueBot lent itself very nicely from beginning to end with the researching skills we focus on in EY2. From the very beginning when the children set out to explore, form questions about what the BlueBots can do, they had to engage all of their researching skills to be successful at using the BlueBots, getting from one place to another, planning, building cities and tracks, drawing maps, giving oral and recorded directions.

Furthermore, several PYP Learner Profile Attributes were also developed through these investigations. Below are excerpts from Making the PYP Happen and some examples of how early coding with simple robotics (like BlueBots) can help young children develop these attributes:

Inquirers: They acquire the skills necessary to conduct inquiry and research and show independence in learning.

Much of early learning revolves around finding out through play. Students learn about materials, spatial awareness, patterns and sequencing through investigations with BlueBots. “Interactions with technology may revolve around pressing buttons to see what happens, and exploring the immediate responsiveness of certain actions…Children need a chance to explore and experiment with technology tools before they can be expected to master them and use them effectively” (Donohue, p.72) Young children benefit from hands-on exploration of cause-effect toys like the BlueBots.

Knowledgeable: They explore concepts, ideas and issues that have local and global significance.

Never have digital tools played such a significant role in children’s lives as they do today. Every day young children are exposed to tablets, smartphones or computers both at school and home. As children navigate the digital sphere, it’s important to provide them with some knowledge of how these tools work, and introducing the basics of coding (sequencing, logic and reasoning using Bluebots) is the first step in becoming knowledgeable about computer science.

Through exploring BlueBots, young children have opportunities to make decisions, problem-solve and extend their understanding of number, shape and space. Whether they are measuring the length a BlueBot travels with Unifix Cubes, or creating bridges and ramps with wooden blocks, these children are engaging in complex problem-solving opportunities in addition to key mathematical concepts, all through play.

Communicators: They understand and express ideas and information confidently and creatively
in more than one language and in a variety of modes of communication.

Coding has always been a part of the digital world, but now more than ever, it is shaping the way we think and learn. Young children have the opportunity to take part in this new language that is very current and relevant to them. Using BlueBots promotes collaboration and gives students opportunities to listen to information and express ideas confidently.

Risk-takers: They approach unfamiliar situations and uncertainty with courage and forethought, and have the independence of spirit to explore new roles, ideas and strategies.

Children are faced with different challenges every day. Overcoming failure and developing a growth mindset is important to foster confidence and independence in children. Coding (both online and offline) provides children with repeated opportunities to practice and overcome failure. Each logical step involved when creating code and programming BlueBots provides its challenges and rewards and empowers children to take ownership of their decisions and learn from them.

Since the Hour of Code was first introduced in December there has been growing interest across all grade levels at our school, and it’s been through inquiry-based investigations that we’ve developed a deeper understanding of how best to integrate this new skill and concept into our existing Programme of Inquiry. Several other teachers in grades 1-4 have integrated coding and BlueBots into their classroom. Joe Blaney, the grade 2 teacher writes:

The students in my class have loved accessing the many aspects of our maths curriculum through coding and robotics. It gives the students so many opportunities to develop higher order thinking skills in such engaging ways.

While we do not yet have a coding curriculum for our school, the opportunity to explore coding has given students and teachers a glimpse into the cognitive benefits and transdisciplinary links with the PYP. How does your school address the growing need for coding and robotics in the Early Years and beyond?

Computer programming is not a standalone activity, but permeates about every aspect of society today. Whether that fact excites or scares you, teaching kids to program helps them to actually understand the world they live in. (Global Cognition)

8 thoughts on “Decoding Coding in the PYP”